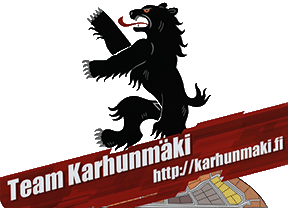 Team Karhunmäki is known for its various motorized vehicles. Team owns e.g. ATVs, motorbikes, and a Grand Tourer Injection class car. The Main Driver and the Mechanic of the team – the Male Bear – is very fond of these fast vehicles. The Bear Cubs are following Male Bear's traits and have (very fast!) vehicles of their own. The Female Bear, for the most part, is indifferent to the team's activities, but she enjoys the passion of the rest of the team.

The Male Bear's first hands-on experience of motorized vehicles as a cub.

Robin had an unforgettable opportunity to perform for the young Karhunmäki generation!

The Weather Prediction in Karhunmäki

Karhunmäki is known for the Extreme Weather Conditions #1

Karhunmäki is known for the Extreme Weather Conditions #2

Route from Karhunmäki HQ to Science Park by a Motorized Vehicle

The Famous Delicacies from Karhunmäki

Real and Fluffy Bears in Karhunmäki

Karhunmäki will get it's very own Sports Stadium

Karhunmäki Campus (see also) was on time and according to what was planned!